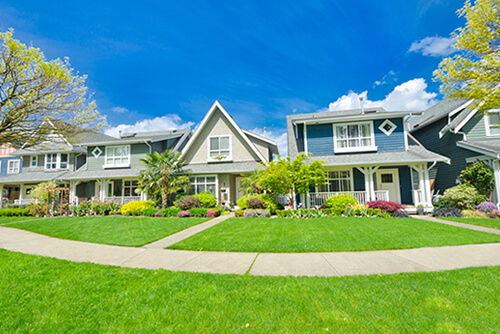 Read on for our insights and news posts and if you have questions contact us.

The Most Popular Roofing Styles for New Homes

Just as you can select different materials to build a roof, you can add character to your home with different roofing designs. While there are dozens of roofing variations, a few crop up more than others. We showcase six of the most common styles here in Canada below.

Commonly referred to as a peaked or pitched roof, gabled roofs are distinctly triangular. The shape allows water and snow to run off easily. The vaulted ceiling in the attic also improves ventilation.

Comprising four steep slopes, this French-inspired roofing style boasts a boxy exterior. As a low-pitched roof with a flat top, Mansard roofs are an excellent choice when converting attics into living spaces, known as garrets. Garrets often use dormers for natural lighting inside.

Similar to the Mansard style, the Gambrel uses two verticals instead of slopes. In the front, the roof also hangs much lower. Barns, farm houses and cabins usually use Gambrel roofs as well as homes of the Dutch Colonial and Georgian styles.

Unlike most other roofing styles, the Saltbox is asymmetrical. It is a pitched roof with one short and one long side, giving half the home an extra storey. The elongated front-facing slope allows water to easily slide off.

A hip roof slopes on all four sides in equal length and steepness. Hip roofs often come to a ridge or flat spot. Only the pyramid roof meets at a point, which increases the design’s utility. Bonnet roofs are another variation, where two sides slide out at a wider angle to form a porch underneath.

Flat roofs are less common on homes today because they are hard to maintain. That said, many commercial and apartment buildings still use this style. Some residential properties use a variant called the Skillion instead, which slopes the roof to only one side. This improves its functionality and creates a modern look.